Another library find, Margaret Atwood’s 2001 Booker Prize winner, The Blind Assassin. What initially drew me to this book was its cover. The vintage appeal, the oval face and softly muted colors of the classic prints I have so admired in antique stores since childhood. Then the all important flip to the first page which reads, “Ten days after the war ended, my sister Laura drove a car off a bridge.” Consider me sold. 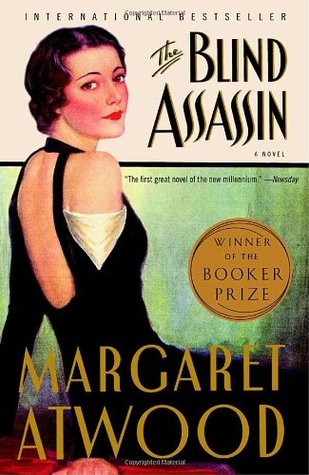 The Bind Assassin is largely told from the perspective of Iris Chase, now in her eighties, as she recounts her past with her sister, Laura, who very much dominates her thoughts. The once great Chase fortune has been diminished and what remains is Laura’s legacy after Iris posthumously published Laura’s writings. The mystery and scandal around the Chase family pulls the reader forward through the twists and turns of the story.

I also thoroughly enjoyed the setting of the novel, Port Ticonderoga, Canada, because the location seemed so innocuous for all the mystery swirling around the Chase family. The setting is vividly brought to life in both the past and present, and the societal divide between the previous century and the new millennium as described by Iris is fascinating.

The novel is broken up into fifteen parts, each containing an unspecified number of chapters. Each part focuses on a different aspect of the story and they alternate one after the other. For example, Iris’ present and her flashbacks would be in one section and Laura’s novel and news clippings from the past would be in another section.

One of the best parts of this book is that you get the feeling of being a detective. Which details are relevant? Which sister is telling the truth? Atwood teases her readers with little clues that are expertly wrought. As fact and fiction blur you cannot help but get caught up in the mystery.

Even when you feel you have pinned down a detail or plot point, Atwood is a compelling enough writer to make you believe you haven’t fully figured it out. That small nugget of ‘what if’ propels you through The Blind Assassin.

Atwood truly is an amazing storyteller whose poetic musings make any of her novels more impactful. One of my favorite lines was a random bit that felt like an incantation, “I was sand, I was snow–written on, rewritten, smoothed over.” Gives me chills. The whole novel is littered with this gorgeous debris of language that made me pause to contemplate a sentence. As a reader, that’s one of the most powerful sensations–the urge to stop and contemplate rather than forge ahead.

My one complaint, if any, is that at times the story felt a bit slow. Especially in the beginning, when Iris flashes back to the early points of childhood. But as you churn through the pages, you get the sense that every detail is connected, which further builds the tension.

One of my favorite novels of all time is John Irving’s A Prayer For Owen Meany. In many ways I think Irving and Atwood’s novels are kindred spirits. Both have a narrator whose life is defined by a small, strange family member or friend that they feel compelled to help. These narrators are the survivors who must write down their trials. The subjects–Owen and Laura–are both lit from within by their conceptions of religion, and no one truly understands them until it is too late. These are large-scale comparisons but if you are a fan of A Prayer For Owen Meany, I would highly recommend Atwood’s The Blind Assassin. And vice versa if you haven’t read the John Irving novel.

I find myself being deliberately vague with this review when describing the plot because I do not want to spoil the mystery in any way. I will say that a discerning reader will quickly pick up on the subtext Atwood weaves throughout The Blind Assassin, and the ending was slightly disappointing because I thought Atwood would round things off more. Still a great read though.