As per my usual these days, I found this book at the library. The quirky title caught my eye and I was intrigued enough by the back jacket to give it a go.

Unwittingly, I picked up book eight in a series called The Tom and Scott Mysteries. One Dead Drag Queen finds Tom hospitalized after a series of bombings at the local women’s health facility, where Tom volunteers part-time. Tom’s partner, Scott, believes that the bombings may have been more personal; the couple becomes a potential target since Scott is the first openly gay professional baseball player. As Tom heals up, the threats to his safety become more numerous and so do the clues to the bomber’s identity. 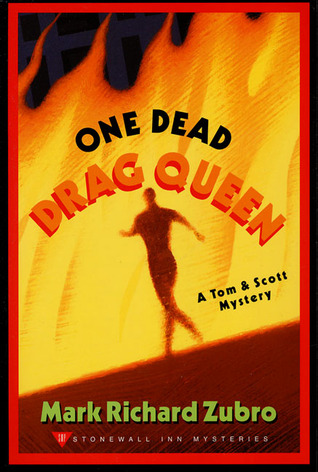 I wanted to get into this novel so badly. I love that the protagonists are a successful gay couple and that they’re not stereotypes. But the story itself is poorly constructed and the writing runs itself in circles. The surprise ending wasn’t surprising because of quality storytelling but because it truly feels as though the writer tossed it in at the last-minute. Author, Mark Richard Zubro, really dropped the ball on this one.

For example, the title of this novel is One Dead Drag Queen and there is only one drag queen introduced in the novel. The subsequent murder of the drag queen–Myrtle Mae–should come as no shock to the reader, which is unfortunate for a novel claiming to be a mystery. Also troubling was that this murder is not the inciting incident or anywhere near the beginning; she’s murdered in the last fifty pages of the book!

One of the most irksome things to me was the constant reference to either of the central characters as the other’s lover. There are plenty of synonyms people! Partner. Boyfriend. Companion. Add some variety for goodness sake! The characters depicted as slightly homophobic would call Tom or Scott the other’s “Buddy”, but that’s the extent of verbal diversity in Zubro’s version of Chicago. It would be one thing if the couple referred to one another in a specific way but everyone else in the novel refers to them as lovers; it just came off like bad writing.

It’s a short novel but it was difficult to get through. For a story that is supposedly book eight in a series, the characters lack depth. Unnecessary repetition in the plot and conversations were had time and again. Pages would go by and Tom and Scott will still be having a circuitous conversation or disagreement with no additional mounting of tension.

Unfortunately, this book was one of the more disappointing reads I’ve had in a while.

I give One Dead Drag Queen 2 Book Bubbles–Nearly Burst Bubble.

2 thoughts on “One Dead Drag Queen”